So I Took Heir No. One To The Movies Last Weekend 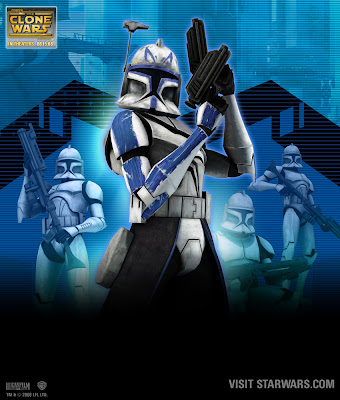 It was hot outside. Cool in the theatre, and he and I think the Clone Troopers rock like Elvis when he was young and cool.

If you simply take it for what it is, that is to say, a cartoon, it is fun. The guy in the center, he's Captain Rex. I took a real shine to Captain Rex. In addition to being Anakin Skywalker's right hand man, he was a professional through and through. Never whining, never complaining. When the odds were bad, and his troops were getting their asses kicked, he simply manned up, and kept shooting. When Skywalker and his padawan had to bail on him, leaving him out numbered and facing annihilation, his response to the bad news? "I understand sir. The mission comes first." Out-freaking-standing. I made sure the Heir caught that.

"It is impossible to govern the world without God and the Bible. Of all the dispositions and habits that lead to political prosperity, our religion and morality are the indispensable supporters. Let us with caution indulge the supposition that morality can be maintained without religion. Reason and experience both forbid us to expect that our national morality can prevail in exclusion of religious principle." - George Washington

"Government is not reason; it is not eloquent; it is force. Like fire, it is a dangerous servant and a fearful master."- George Washington

And Now...A Word From Our Sponsor

“If you love wealth more than liberty, the tranquility of servitude better than the animating contest of freedom, depart from us in peace. We ask not your counsel nor your arms. Crouch down and lick the hand that feeds you. May your chains rest lightly upon you and may posterity forget that you were our countrymen.”- Samuel Adams

Blackiswhite, Imperial Agent Provocateur
Go ahead...comment on the fiction. I dare ya!

View my complete profile
"Its not the years, its the mileage."
-Indiana Jones, in Raiders of the Lost Ark

"We love the things we love for what they are."
-Robert Frost

"The hand that knows his work will not be told to do it better or faster; those two things."
-Robert Frost

"The more I learn, I find how little I really know..."
-David Baerwald

Political Correctness is tyranny by the inane masquerading as tolerance and equality. Only a fool harbors the belief that all "cultures" are equal. All cultures didn't build this nation, and unfortunately, too many in society are rejecting that culture in the pursuit of a mirage. If you remind them that the equality means equality of opportunity rather than equality by taking from the earners and giving to the slugs, and you're likely to experience their "tolerance" first-hand.

Have You Seen Me? Call 1-80y-ears-ago.
Love me? Hate me? Just feeling like dropping a line?

Remember: If you are particularly obnoxious or offensive, you just may become the subject of a post.

The Dark Lords of the Sith

Right At Home On The Right

"This website contains some copyrighted material which in accordance with Title 17 U.S.C. Section 107, any copyrighted work in this message is being distributed under fair use without profit or payment to those who have expressed a prior interest in receiving the included information for non-profit research and educational or criticism purposes only. Not withstanding the provisions of sections 106 and 106A, the fair use of a copyrighted work including such use by reproduction in copies or recordings or by any other means specified by that section, for purposes such as criticism, comment, news reporting, teaching (including multiple copies for classroom use), scholarship, or research, is NOT an infringement."